I am 28. White. A Female. And a former Peace Corps Volunteer. I am HIV Positive. This is my story of how a few months, a few people, and a few events in Zambia changed me and my life forever. This is the story of how I contracted HIV and brought my Peace Corps Journey to a crashing halt... and how I am working now to pick up and put back together the pieces of my life as a newly diagnosed person living with HIV. This was not the journey I had originally planned... my path has traumatically and dramatically changed... but it is the one I am on now. There is no going back. There is only forward. I welcome you to follow along with me as I attempt to explore this new life ahead of me, whether you are someone from the Peace Corps community, or someone living with HIV. I welcome your comments, questions, suggestions, and opinions. Let us go forward together. To start from the beginning, click here He Gave Me More Than A Bracelet. 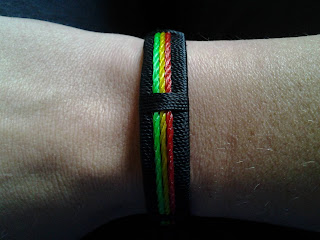 I was sitting and cuddling with him on the couch. I admired his bracelet. He took it off and slipped it onto my wrist. I remember feeling special. I thought to myself, "How sweet. He likes me﻿. He gave me his bracelet." Turns out that later that night he gave me something more than a bracelet... he gave me HIV...
The beginning...
After 7 months in country (serving as a Peace Corps Volunteer) I was already changing. The Peace Corps tends to do that to people. I had made new friends- both Americans and Zambians. I had gone through many ups and downs in the village and my workplace. I had learned the culture and the language. I had felt the homesickness and loneliness that only volunteers can know.﻿ And I had experienced the constant admiration and proposals from Zambian men. Those 7 months had been a challenge for sure, but overall I was enjoying my experience. I was enjoying my village, my work, my friends, and of course all of the extra romantic interest and flattery. And although I did not enter into my Peace Corps service actively seeking out a relationship, when a person is so far from home and living alone in a village that seems so far removed from everyone and everything else, companionship is something that becomes more and more desirable.
I met him while on a trip in the capital city. He was a friend of a friend of a friend. The first night that I met him, we all went out dancing together as a group. I spent the whole night dancing, talking, and eventually kissing with him. At the end of the night we exchanged phone numbers and went our separate ways.
In the following days, we texted and talked on the phone. He seemed like a pretty okay guy. He even paid me a surprise visit one evening where us volunteers were staying. We just sat and talked for about an hour. Later in the week, he invited me over to his place for dinner. I went to his apartment. He cooked for me. We watched TV. We cuddled. I slept over. I spent the whole night telling him NO and resisting the urge to have sex. In an attempt to calm and satisfy his desires and needs, I suggested, and later performed oral sex on him.
We talked the next day and he invited me over again. We picked up some food for dinner and then went back to his apartment. We laid and cuddled on the couch for a long time. He gave me his bracelet. We eventually made it into the bedroom again, and thus started another night of strained fooling around and NO's. I gave him oral sex again. But, as the night went on, and either my hormones or loneliness wore me down, I finally gave in. I said YES. We then had sex. We used condoms.
The next day I had some mixed feelings, but I didn't totally regret it. I thought, "You know what? Why can't I have sex with someone? Everyone else seems to be doing it. This isn't such a big deal. This doesn't make me a bad person." (I forgot to mention that this was and is the only time in my life that I've had casual sex with someone who I am not in a long term relationship with).
After I left town a day later, we kept in touch. We texted and chatted on the phone. He wanted me to be his girlfriend. I needed some time to think about it. I continued to wear his bracelet.
Fast forward to exactly 17 days later...
I was in my village. I got sick. We thought it was Malaria- all the symptoms seemed to fit. I was brought back into the capital city for medical care. They couldn't quite figure out what was wrong with me. It wasn't Malaria, and it kept getting worse.
Ironically, he came to visit me. He took me out for coffee and we sat and talked. He bought me juice and bananas. He was still a nice guy.
The next day my symptoms got more severe and I was hospitalized. In addition to many other tests, they did two separate HIV tests. It was just a precaution. Based on my sexual activities, no one thought it would be likely for me to get HIV. The tests both came back Negative.
They still didn't know what was wrong with me, so the next step was to medically evacuate me to South Africa. I was immediately hospitalized there, and additional tests were performed, including another HIV test. It came back Positive.
Two Negatives. One Positive. Test again, wait a day. Positive. Final confirmatory test, wait a day. Positive.
That was it. No going back. No chance of mistakes or false positives now.
I was shocked. The doctors were shocked. I had one evening of protected vaginal sex. We used condoms. The condoms didn't break. I had unprotected oral sex twice. I didn't have any known open sores or cuts in my mouth. But, somehow I had still contracted HIV.
Posted by LivingPositive at 7:39 PM